I want my own mouse circus 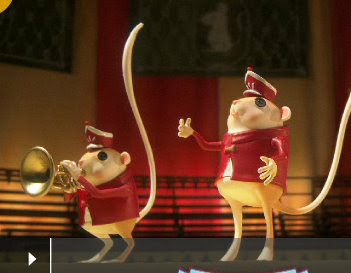 Saturday night the boyfriend and I went to see a little piece of stop-motion genius, Henry Selick's Coraline. If you've seen James and The Giant Peach or The Nightmare Before Christmas, you are familiar with Selick's work. Coraline was three years in the making, employing dozens of artisans, artists and crafters (like Althea Crome, who knitted Coraline's tiny sweaters and gloves on needles smaller than toothpicks) to create the wondrous world of a curious girl and her mysterious neighbors.


Coraline is gorgeously made, and meets my main criteria for any film: a good story, well told. I think it is being marketed as a kid's film, and while there certainly were a lot of kids at the showing we went to, there were plenty of adults, and everyone was equally mesmerized by the spectacle Selick and his team have created. But the thing that made me squeal like a little girl was Mr. Bobinsky's Mouse Circus. See, when I was a child I had this thing about mice, this secret belief that behind the walls they lived a Borrower's life, wearing tiny clothes, sleeping in little beds made from matchboxes, dining at spool tables, tooling around in toy cars, Stuart Little-style. As an adult, I may or may not have let that belief...um... go (and this despite having once owned an old house that had many a mouse trap to catch the little buggers before they could do too much damage). Mr. Bobinsky's mice wear cute little red band uniforms, play tiny musical instruments, and put on a circus performance with military precision. There's a secret behind their showmanship that I won't give away here (go see the movie), but they are just adorable and must be forgiven for their role in any deceit. Plus if you ask them nicely they will spell your name with their tails (click the pic below to make your own). 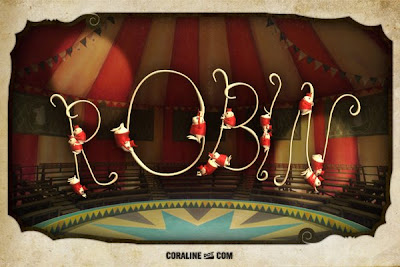 OOOOOOOOOOOh... I cannot wait to see this! Both of boys are sooooo into computer... stop motion animation... they are taking a class right now. They are in two different groups and each group is making a short animation film... they are only 10/13 yrs old... they will be soooo ahead of the game when they hit college... as of right now that is their goal!
My little filmmakers! I hope someday you will see their's in the theatre!
Right now we will settle for seeing Coraline!

My husband is dying to see this movie (he's a big Wallace and Grommit fan). I hope it comes to New Zealand.

only a movie said...

Love the new header - you could put some mice in that!

The movie looks amazing. Glad you had fun.

That looks ADORABLE!
I hadn't planned on seeing it, but now I'll have to make it a date night w/ my 5-yr old.
Thanks!

And here all the while I thought they were rearranging the electricity in the walls. You just never know.

Thanks for the comments Robin! I am sure that your cape is lovely. I have a vintage one I found at a thrift store that I wear all the time. I love it! I think you should keep it as a cape and the get a vintage vest too! The bf and I have seen Nickel Creek in concert too, on their last tour. They are soo dang good live. Happy week!

Oh that really brings me back to some of the only books I every liked to read growing up--the Borrowers, Stuart Little, the Boxcar Children. AHH. Sounds so cute!

The House That A-M Built said...

Oh it will be ages before it makes it down here to Australia. I will wait patiently. I too was a Borrowers fan, Santa, etc you name it .. I still want to believe! Sounds like a magical film. A-M xx

Our whole family loved Coraline, the book and the film. And as a Stuart Little and Cricket in Times Square fan, the mouse circus was truly spectacular.

I absolutely loved the Borrowers when I was a kid...! I can't wait to see the movie!