It is evening. I am five or six years old. I am in the bathroom with my mother, she at the sink, me sitting cross-legged on top of the carpeted toilet seat cover. Our bathroom has the most fabulous '70s wallpaper: giant purple poppies (or anemones?), white daisies and bright green ferns.
I am watching her "put her face on". She is getting ready to go to a party with my dad, wearing a pink satin tunic that she sewed herself, two rows of silver sequins adorning the keyhole neck and the cuff of each 3/4 sleeve. Her frosted hair is pulled back from her forehead with a tortoise barrette, the ends are straight with a flip. She looks so glamorous and pretty, even without the makeup, and I am in awe as I watch her apply powder, blush, eyeshadow. Her eyeliner is in a red plastic pencil that requires a twist, and it doubles as an eyebrow pencil. Mascara, lipstick for her, less lipstick for me. A spritz of Joy perfume for her, much less for me, on my wrist.

I am holding her earrings, candy pink squares that dangle from long silver sticks. They almost touch my shoulders when I try them on and they have always fascinated me. They are one of the items I covet most in her jewelry box, even more than the iridescent green crystal earrings, which are like shiny fairy moss, or the chunky smoky quartz ring, which barely fits my thumb and I'm always tempted to lick, certain it would taste like the root beer barrel candies that I don't really like anyway.

The babysitter is here. She is very pretty and she gets me into my pajamas soon after they leave for the party. She lets me brush her hair, which is dark brown and really, really long. It's time for bed, and I fall asleep smelling the perfume on my wrist, dreaming of candy pink earrings that dust my shoulders like magic.
{all photos from Etsy, click on the earrings to get to their respective shop} 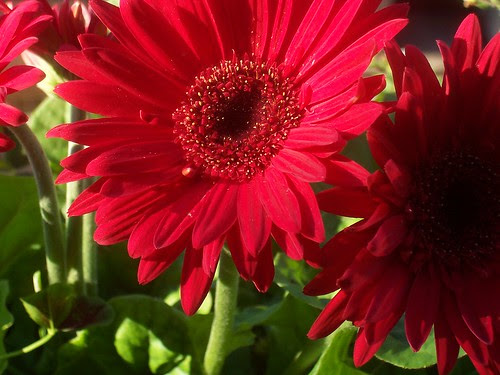 While my "Charlie Brown Christmas Tree" tomato plant puts forth one lonely little fruit, my gerberas are doing nicely thank you. They smile at me every morning when I water everything in my little balcony garden.

A diva's work is never done

Sorry for the long absence folks, I've been busy with the installation of my self-portait series... 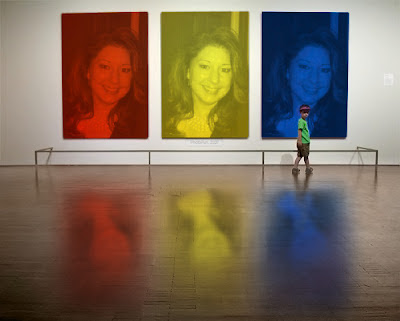 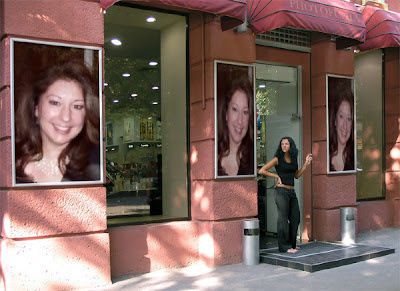 and getting my photo taken for Russian Vogue. 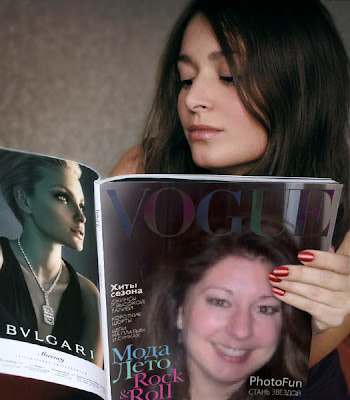 Actually my life is nowhere near this glamorous and I've just been busy with work stuff and haven't had time to post anything interesting.
Addictive photo fun by PhotoFunia.

When I first saw this picture on the Flickr homepage (under "Everyone's Uploads") I thought it was a dance studio or a very fancy karate or exercise studio. Then I realized that the contraptions in front of the "paneled" wall were not pilates torture devices but garage door tracks. It's a garage. With chandeliers. And a tin ceiling. And checkered floor that would make Fifi Flowers swoon.

Labels: black and white, flickr, I love the internet, nonsense 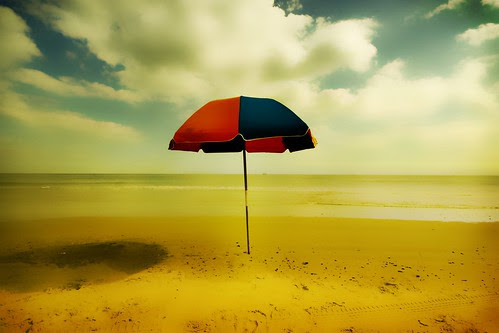 Summer is dining at an outdoor cafe... the smell of wet dirt from last night's rain as the morning sun heats up... nasturtiums on salad... waiting in line for a coke float at the burger stand... cold white wine and sweet citronella candles on a blanket at a nighttime concert in the park.

Summer is fresh herbs growing in pots on the porch... tomatoes from the garden seasoned only with the warmth of the sun... homemade ice cream... swimming lessons... iced coffee... the squish of bare feet on wet sand at low tide.

Summer is the refreshing cool of air conditioning on a hot humid day... kids running through sprinklers... admiring your new sandals and a fresh pedicure... the sound of the crowd at a little league game... eating popsicles before they melt... playing hooky from work to enjoy a less-crowded beach on a weekday.

Summer is reading "chick lit" in the shade... getting out of the car to watch sailboats pass while the drawbridge is raised... fresh peaches... children's tiny bathing suits drying on the clothesline... driving with the sunroof open, the AC on and the radio loud.


Julia at Red Otter Shop inspired this post with her query for what defines summer (illustrated with pies not made by human hands). Thanks Julia!

And, as this is my 50th post, I would like to thank you for being here: those who comment, those who link to me, and those who just stop by to read. I'm so glad you all enjoy my random musings enough to keep coming back. When I started this little experiment to see if there was an audience for my ramblings, I never guessed that I would have made so many new friends and been so inspired.

A big thanks to Patricia at PVE Design, who was the first person to ever comment (on my third post). I have no idea how she ever found me but I am grateful for her early encouragement. A special thanks to those bloggers whose own posts are so interesting to others that their readers click through their blogroll and show up here. I get TONS of traffic from Julia at Hooked on Houses, A-M from The House that A-M Built, Rebekah at Little ByRD, Robin at A Little Bird Told Me, Laura at Fifi Flowers and Diana at Please Sir.

Wow, it's like an Oscar speech. Cue the music and cut to commercial. 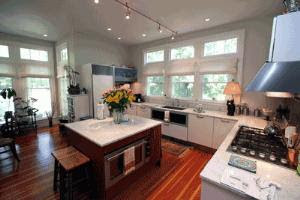 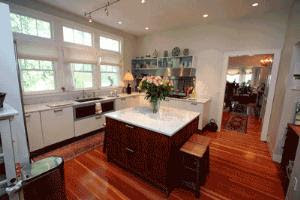 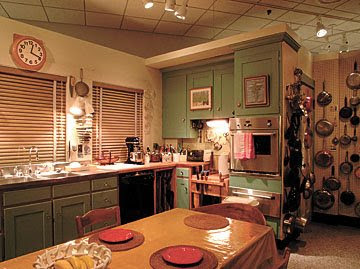 {Julia's kitchen back in the day, now on display at the Smithsonian. Julia had the counters custom designed at a height comfortable for a 6'2" woman to cook at. On the right is one of two pegboards designed by her husband to hang all her pots, pans and molds. Photo from the Smithsonian via current.org}

The late, great Julia Child donated her famous Cambridge kitchen to the Smithsonian, so it stands to reason that the house it came out of would need a slight remodel. Now that the house is for sale, the world can peek into the rooms that never made it on camera in the 40+ years that she lived in and filmed her Boston-based public television cooking show.

The original kitchen has a homey look that contributed to the success of her show, which focused on the approachable aspects of gourmet cooking. But I think she would have appreciated the bright airiness of the new kitchen, especially as it features Miele, Sub-Zero and Kuppersbusch Okotherm appliances, as well as a big marble-topped island perfect for rolling out pastry dough. As it should, for $4.35 million, no?

Labels: cooking, design, when I win the lottery 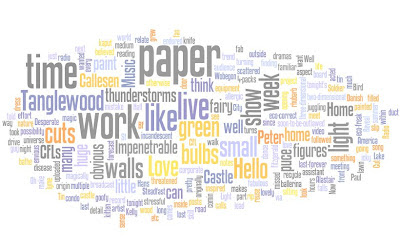 Robin at A Little Bird Told Me turned me on to this nifty Wordle widget that takes the most-used words from your blog postings and amalgamates them into this cool visual word cloud. Given that "time" "work" and "paper" show up so much in mine, I think its a sure sign that I need a vacation.

Labels: I love the internet, nonsense

Whose bright idea was this anyway? 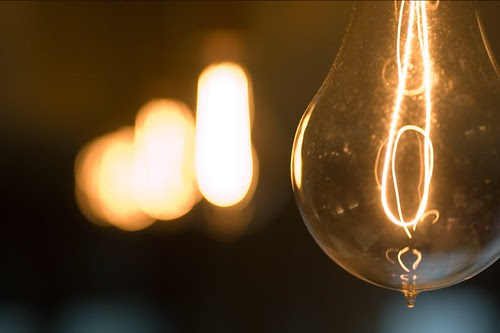 I am not a fan of the eco-correct, mercury-filled, last-forever compact florescent light bulbs (CFLs). I have spent way too much time under their flickering beam in corporate America to want to live with them at home as well. Plus I took all that time and effort finding just the right paint colors for my walls; if I wanted puce walls I would have painted puce walls.

So I buck the trend and stocked up on some soon-to-be-outlawed 4-packs of the Reveal incandescent light bulbs at the Home Desperate tonight after work. In exchange for their low prices I endured the wrath of some CFL eco-freak who acted like I was beheading a kitten. I told her I was allergic to CFLs but I don't think she believed me.

For the record I do lead a pretty green life otherwise - recycle, reuse, walk to work, etc. But do I have to bathe my home in icky green light to be green?

These ain't no kindergarten scissors 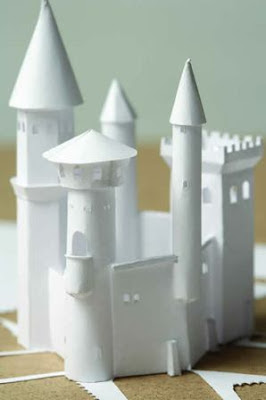 I am so envious of artists who work in a medium like this, their skill, their patience. It's not like an oil painting, where if you make a mistake you can paint over it, or a dress, where you can rip out the seam. One slip of the knife and kaput! hours of work, ruined.

Peter Callesen, the Danish artist behind these creations, magically turns two-dimensional paper into three-dimensional images. He calls it "obvious magic, because the process is obvious and the figures still stick to their origin, without the possibility of escaping. In that sense there is also an aspect of something tragic in most of the cuts." 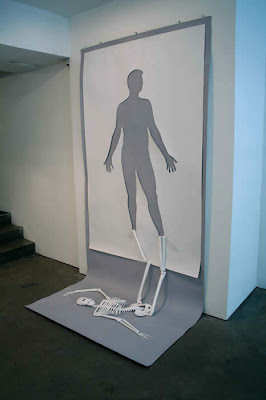 {Cut To The Bone, 2007}
"Some of the small paper cuts relate to a universe of fairy tales and romanticism, as for instance "Impenetrable Castle" inspired by Hans Christian Andersen's fairy tale "The Steadfast Tin Soldier", in which a tin soldier falls in love with a paper ballerina, living in a paper castle. Other paper cuts are small dramas in which small figures are lost within and threatened by the huge powerful nature. Others again are turning the inside out, or letting the front and the back of the paper meet." 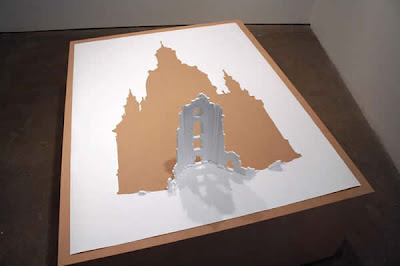