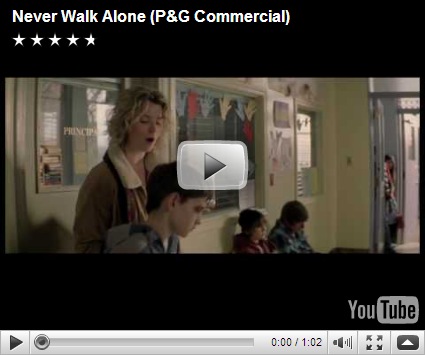 All of the P&G Thank You Mom commercials shown during the Olympics have been very touching, but this one really got me (I should note that I tear up at the slightest provocation. Hallmark commercials. Maxwell House Christmas commercials. Parades. I’m a sap). I sang this song in college glee club but our rendition lacked the touching visuals. I especially love the scene of the mom changing her own tire in front of her daughters. I couldn’t change a tire if my life depended on it.

The song is from Rodger and Hammerstein’s 1945 musical Carousel. It is also used as an anthem by the Liverpool Football Club, among others. If you go to the YouTube site for the above commercial there are some hilarious comments by soccer hooligans who are up in arms about P&G appropriating “their” song. Apparently they were not aware that its origins have nothing to do with football, although it is well documented, and actually gives more credence to P&G’s selection of it as a theme for this commercial.

One of these things is not like the other

At the beginning of the wave of good magazines going under, a little gem called Cottage Living was the first to go. I was among the many who mourned its demise, and also to receive what publishers Time Inc. thought was a suitable replacement: Southern Living. FAIL.

No offense to the legions of SL subscribers, but a mag that “celebrates the best of life in the South” and where every cover features food instead of charming decor does not fill the void. I would think a better fit would be another sister publication, Coastal Living. Or even Real Simple, both of which have more in common with Cottage Living. And PS, last time I checked, Connecticut was not considered to be in the South. Except maybe if you are in Canada.

Among the most recent publications to hit the skids was Metropolitan Home, one of the last bastions of contemporary design in the shelter mag world. I had hopes that Hachette Filipacchi Media would replace it with its lovely sister pub, Elle Decor:

Silly me. I received a postcard yesterday welcoming me to my replacement subscription: