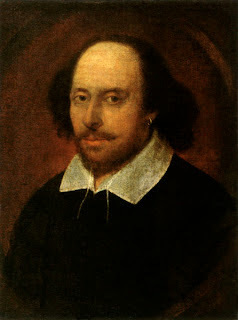 {The esteemed Bill S., doesn't look a day over 443.
Portrait attributed to John Taylor. Pic from Tudor History}
My first encounter with The Bard was at McDonalds when I was in grammar school. No, he was not shakin' down the Hamburglar for some change so he could buy an apple pie. He was, however, plastered all over the place in a 1970s Tudorbethan fantasy of "stained glass" windows and half-timbering, interspersed with stencils of famous lines from his plays. Very Merrie Olde England.

Why, you may ask (and I did when I was a kid) was this place an homage to Shakespeare? Because it was in a town called Stratford, named for the fair city over the pond, home of the Globe Theater abroad and the (now defunct) American Shakespeare Theater here. Back in the day, my parents tell me, the AST was the place for great theater in the region, Shakespeare or otherwise. Folks drove for miles to see Christopher Plummer, John Houseman, Lynn Redgrave, etc. perform on its stage, and restaurants in the area did a brisk trade in pre- and post-theater dining. The Bard became a bit of a theme and I guess McD's just jumped on the bandwagon.

I half remember someone's birthday party (mine perhaps? Third grade?), sitting with a group of classmates in two booths that spanned the end of the aisle. We took turns eating each other's fries (back when they were cooked in beef fat and quite tasty) and reading the quotes on the wall, but we were too young to understand them or their references, and too engrossed in our smorgasboard to care. Fast food was a rare treat then, and going to McDonald's for someone's birthday was a novelty. We were easily entertained.

Table for 4 please, in the "Rose by Any Other Name" section if you have it.

Hey Crazy girl... I have my own Stratford memories, but they involve my grandmother who at any given moment has at least two kinds of jello in her fridge and a rack of spools of thread lined up rainbow fashion by color that I was always rearranging. Talk about easily amused...

My grandmother always had lots of store-bought cookies and sugary cereal, like Froot Loops, that we weren't allowed to have at home. Ah, those were the days....

hey robin - our posts have very similar threads - weird coincidence - I just hopped over tonight after not reading for a couple of days - and I just finished a frame in black and white, I thought about doing it after I read your black and white toile post. ciao. m

Marnie, I'm honored to have inspired an artist such as yourself, be sure to send a pic and I'll post it!

haha, love it! very to pig out or not to pig out, that is the question. i remember mickey d's pitching for a "reading week" when i was little...

... big mac with a lil literature on the side? don't think it would fly today.

thanks for the memory!